You may be wondering why I call myself a medical oddity. The full story that started it is below.

It started as a joke and now I identify with it. Remember, I'm not sick, I'm medically complex! 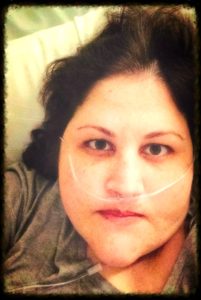 When I was 22 years old, I moved from California to the east coast to try to find a job in politics. Having just graduated college and recently competed a White House internship, it seemed like the logical place to land. My mother, as is her custom, was worried. Looking back, I understand that her fears went beyond the usual empty nest syndrome that occurs when a child permanently leaves home. I was leaving, moving 3,000 miles away and three months earlier I had undergone major surgery (and brain surgery at that!) to remove a pituitary tumor in an attempt to cure my Cushing's Disease.

But I was determined to follow my political leanings to the epicenter of of US politics: Washington, DC. I had a good network of friends and colleagues to lean on, I told myself, I can do this--no problem!

My disease had other ideas for me, it turned out. See, Cushing's is a complicated little sucker and surgery is only the first part of the equation. I knew moving out there that I would need to immediately secure an endocrinologist as steroid replacement therapy is required post-op. I would have to wean off the hydrocortisone slowly, under a doctor's care and then, I believed, I would be better. Of course, now I know better. My disease has come back twice and now, a year and a half after the third surgery, I am still sick and dealing with a host of new issues that have arisen because of my disease.

What I didn't realize at the time is that steroid replacement and withdrawal can be a drawn out, nasty process and I was in for a whopper, and very far away from home.

Maybe you're asking yourself, what does this have to do with the title of your blog? I'm getting there, I promise.

For those unfamiliar with my malady, here's a quick, simplified primer: Cushing's causes your body to overproduce the stress hormone cortisol and in turn, your adrenal glands, which are part of the production system, no longer function. Once the tumor causing this imbalance is removed, steroids are used as a fill-in to stimulate the gland until the adrenal glands 'wake up". In my case, as the steroids decreased I became more susceptible to catching colds and viruses and each time they wreaked havoc on my body.

I woke one Saturday morning with a pounding in my head, or more specifically, my left ear. Trying to calm the throb with Advil proved unsuccessful so I decided to walk to the closest hospital I knew of. A couple of miserable miles later (remember, I was convinced I could handle this myself) I ended up in the GW Hospital ER. Ninety minutes passed and finally my name was called. I was checked in by a semi-surly nurse and was told the doctor would be right in.

The young doctor who helped me didn't look that much older than I was. As I gave her the rundown of my recent medical history her eyes widened and she whispered "wow," under her breath.

"Well, let's see what we have here," she said as she grabbed the light from the rack and deftly clicked the funnel shaped attachment. She placed the instrument in my ear. "Hmm." She stepped back and looked at the light. She tried it again and peered in. Unsatisfied she went at it from another angle. Then another. And another. With each new adjustment she thrust the hard plastic cone harder and deeper into the offending ear.

"I can't see anything. You certainly are a medical oddity."

At that point, my eyes started leaking.

Try as I might, I could not suppress the tears, soon the trickle turned into a steady stream and the doctor looked at me with fear in her eyes: "I'm just an intern, let me go get somebody."

She was gone only momentarily, and returned with an older doctor who calmly took the light, gently placed it in my ear and stated: "Yep, you've got a raging ear infection. Nothing that can't be cured with a short course of antibiotics." She returned the scope to the younger doctor, gave her a pointed look, smiled at me and left.

She was right, of course. My simple ear infection went away very quickly and I moved on, but I'll always remember the time I was just another medical oddity.