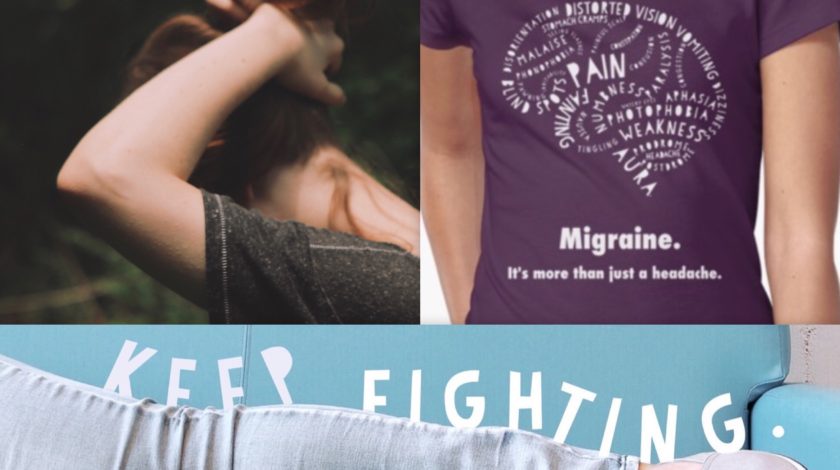 Profiles in Pain is a periodic guest column on the Tumor Blues Blog that highlights how individuals deal with pain and how it impacts the course of their lives.

I first connected with Mia on Twitter of all places. We both had come to find other chronic illness sufferers who could understand the unique circumstances of living a life in pain (and do so in 140 characters or less!) and now, more than a year later, a friendship has blossomed.

Mia is kind, funny and an exceptionally talented artist. She has a unique way of capturing what it is to be chronically ill and she’s taken her design skills online at Breathe Mia Arts. You can also check her stuff out on RedBubble and follow her on Twitter.

I Survived, by Mia*

I haven’t always been this way. This is after. My life before was different.

I didn’t know it at the time, but there was a day that separated before and after. It was the day I ran on the flat sands with my arms outstretched imagining I could fly. The day I saw the legs of giants standing in the swirling mists. The day the rain turned the road to a river and our car drifted away.

That was the day the invader came.

Life after felt normal at first. I graduated with my degrees. I began my career. I thrived. I loved my work. My words were published, my expertise sought locally and nationally before I was even 30. I was tangibly involved in improving the lives of individuals and making my community better.

But I had a growing secret that I struggled to hide: I was in pain.

The power of the white coat is strong. Doctors told me, “You’re fine.” So I tried hard to be fine. At each visit, I would tell them my symptoms and describe my pain, and they would tell me, “It’s normal,” or, “Drink more water,” (why is that always the answer?). They didn’t listen to me. And, in retrospect, I didn’t know how to help them hear me.

I thought I was weak.

I thought I was anything but sick. Because the doctors told me I was fine.

Then my body began rebelling. It’s the strangest sensation, having your body not listen to you. My pain passed the threshold of what I could believe was “fine”. I was not fine. Something was very, very wrong. My muscle spasms were worse–I could barely move. I was fainting and weak. My vision was downright bizarre, and my migraines were happening back to back so that they felt unbroken. I hurt. Everywhere. Even my soul hurt. I was out of energy. I could go no further.

In 24 hours, my life came to a screeching halt. My whole world narrowed to the four walls of my bedroom.

It is useless to rage against what I cannot hope to undo.

You will have this forever.

That is what the doctor told me. He had kind eyes. It was like a movie when he said that. The whole room froze. Nothing else mattered in that moment except for his lines: “There’s no cure,” He said, “But I can help you live a better life.” I trusted him, the doctor with the kind eyes.

As I move forward, I will see more of the destruction left by the invader. But I will also rebuild, and find a new normal – a normal that accepts that things are different and that my illnesses re-sculpted who I am.

My illnesses won, but I survived. I live through the pain left in their wake, but with every breath I defy the invader. Each whisper of air a reminder – I survived.

Mia is a nonprofit program director who is currently focusing all of her attention on her biggest project yet: her health. When she’s not hiding in her blanket fort (Don’t let anyone ever tell you “You’re too old for a blanket fort.”), you can find her doodling on her iPad, training her service dog Genius, or rummaging about for good food.

*A note from Mia:

Mia is a pseudonym I adopted awhile back when I first ventured out into the world of talking about my illnesses. It means “me” in Italian. I thought it was beautiful. And in the beginning, it offered me protection as I explored what it meant to be labeled with a variety of diagnosis I didn’t fully understand.

I’m less afraid to talk about my illnesses now, but the name has stuck. I like it. It’s part of who I am on this journey. Mia is part of me [now].